I’m looking at the CV params right now, I didn’t vote yet, but I’m thinking perhaps they are a little too conservative.

Working on this to compare our old params w the new: New vs Old CV params Giveth - Google Docs

Going to take a look right now w/ Griff and chat about it, but posting in case anyone else is wondering similar things.

Here is the Giveth Version of the dashboard: https://commons-config-frontend-git-feat-giveth-givethio.vercel.app/

Ok, so for the conviction voting params, I do agree with the general sensation that things are passing a shade too fast for my liking. Sometimes I am just surprised by proposals passing. I think making them a bit more conservative makes sense, but the new proposal live in the garden seems to make it take nearly double the GIV to pass proposals (in comparison to the old params).

I’m particularly interested in proposals around the $30k range because it seems that most big conference sponsorships & development proposals cost that amount roughly. ETHBarcelona & the smart contract audit are two good examples.

GIV price today is about $0.10, so $30k would be 300k GIV.
Aside from Griff, our top token holders with voting power in the garden have around 200k GIV each liquid.

I used these params to test scenarios in the commons configuration dashboard, you can play with it here.

I think increasing the number of tokens required to pass a $30k proposal in 2 weeks by about 25% feels good. I don’t want to make things TOO hard to pass, and with bear market and the GIV token price declining, it is already getting harder to pass proposal of that side. 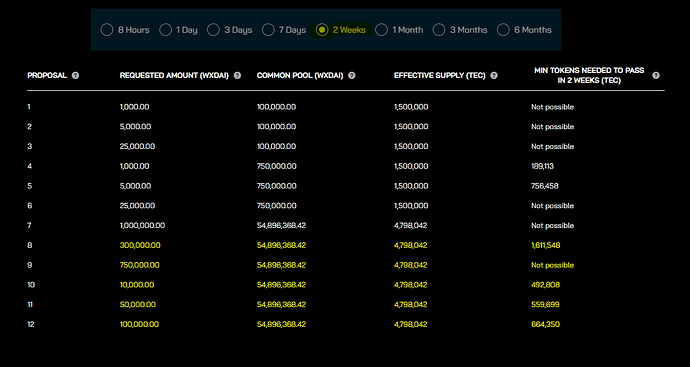 In comparison to our setting as they are now:

Mitch’s proposal may still pass in the Garden, but I spent the time working on this already, so thought I’d just post/share to get feedback.

I LOVE the NICE token idea.

For the others… I have some questions:

I think that people definitely want swag & discounts. Maybe we can make some kind of quest/gamification system where you can add to your GIVpower multiplier with NICE or something.

We could create a non transferable “NICE” version of the PFP and give that as a reward for donating if you already have one of our “initial collection” NFT and use that as a gating system for the swag, staking rewards, discord power/access, etc. That way we can keep NICE token transferable.

I think keeping it transferrable allows for another market to blossom, laissez-faire economics. Also this allows it to be spent on things like swag or PFPs without having to do any spooky token things.

I like the idea of plugging it into GIVpower or other options but I’d like to keep the MVP spec simple for the sake of expediency.

Following with interest but not a lot of feedback.

Based on feedback from today’s governance call, I created the vote to change the CV params as per my earlier comment. These have been reviewed by @mitch & @griff & had no verbal blocking in the gov call.

Here are the parameters & appropriate calculations: 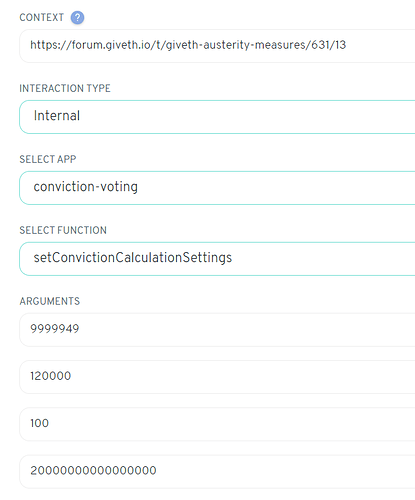 re: GIVbacks factor change suggestion. We discussed it in the research call and the idea that… well, we should really motivate our team to support getting more donations on the platform… If GIV is at $0.10 and we get more than $133k of donations in a round, the max factor will proportionately decrease.

If we were to get more than $200k of donations, the max factor would be 50% automatically because of the gap on the amount of GIV we have allocated to each round.

For these reasons, I voted “no change” in the snapshot

Most of those calculations I would say are irrelevant benchmarks, we’ve never reached this 133k threshold and 200k in donations is a far off dream, the system has never kicked in and we’ve been matching with 75% since the beginning of the program, with the exception of certain Retroactive GIVbacks.

Do you guys have any information to back this up or was it mostly speculation?
GIV is being sold down the line because of the abundance that is being given, either from farmers, from donors, or from projects receiving the donations in GIV. I’m in favour of reducing emissions on all fronts.

I have also voted “no change”.

I don’t think it is a “far off dream”, I think it is a clear benchmark that we need to corral our community around. This, imo, is one of the key purposes of the work that @qqsong @clara_gr & @rainer.hoell are doing with Connect.

We are starting to (and are planning to do more) onboarding of donors, targeting donor needs, getting more donations on the platform. We are also working on getting attractive projects on the platform & getting them to bring their donors.

Do you guys have any information to back this up or was it mostly speculation?

@Griff goes through the majority of significant donations to verified projects every round when reviewing the list for recirculation. He checks to see where the money is coming from & has insight into how our GIVbacks recipients are using their GIV.

And, it was made clear before launch that we needed to get this designed, built and launched before the Bear Market - the anticipation of which was much discussed, so my assumption is that we understood this was coming when we set the parameters.

There’s no way to fully account and prepare for a bear market, we’ve been learning and make changes iteratively, the Univ3 Farm being a perfect example, the update to our CV settings, that just passed being another. The whole point of the austerity measures is to take stock of the situation as it, not as we imagined it 6 months ago and take action.

The whole point of the austerity measures is to take stock of the situation as it, not as we imagined it 6 months ago and take action.

I remember forecasting at a drop to about 20 cents, and we are half that right now so I get the rationale.

? I’m thinking there is probably a threshold we can set as a trigger for “austerity measures” that are most contentious like cutting donor rewards / scaling back the program more significantly.

The CV params are through, the NICE token is warming up… I think we need to sit on the GIVback program reduction for a little bit and analyze it, work to get more feedback from the community; this would be a full scale program change that needs sensitive communications - you wanna do that before EThBCN?

Thanks @karmaticacid It’s really helpful to learn the target giving. If done right and with the right strategy with donors and projects, this should be a starting point not a “far off dream”

NO changes to the GIVbacks Factor:

Yo! I’ve been playing with our swag shop, and I’m thinking… we could actually just open it up so anyone can pay with their card & then we could generate some funding for Giveth that way.

As it is now, you can only pay with gLove & charge it to Griff who gets reimbursed from Giveth, but actually a lot of people want swag and are happy to pay. This seems a very easy and logical way to generate a little revenue.

I think its a logical idea but it would circumvent some of the planned utility I was thinking for the NICE token.

Making NICE the only way to buy giveth swag would create extra token utility. I see the benefit however in letting people pay with fiat/credit cards.

NICE Token - Rewarding those who donate to Giveth The Giveth Platform

I took some time to think more concretely about all the options I laid out last week for the NICE token and I would like to propose an initial spec to get the ball rolling. Minting We add a new token and token-manager to the nrGIV DAO, allowing nrGIV holders to approve bi-weekly distributions of NICE. NICE is matched 1:1 per $1 of DAI or xDAI (more stables could be whitelisted later) and is minted for Nicers on Gnosis Chain. NICE is minted using the Transactions App, via the token manager. U…