This is a proposal to terminate (rather than re-launch) the liquidity mining incentives programs for GIV in the GIVfarm. This includes:

On October 29, 2022 at 15:00 UTC the GIVfarm was hacked. The key we held to control notify reward in the farms was compromised. This basically controls the rate of rewards going out to the GIVfarms. The hacker set the reward rate to an extremely large number, harvested all the remaining GIV rewards & dumped it on the open market. They changed the reward rates for the following pools.

Thanks to the GIVstream, they were only able to actually get ~25% of the rewards allocated to the farm, and we have terminated their GIVstreams. We are working with CultDAO to terminate their CULTstreams.

We have removed the compromised keys from everywhere we know of.

Right now, the pools that were affected look really strange. The APRs are out of this world & anyone who was farming has some seemingly crazy amount of GIV to harvest. It is, however, impossible to harvest because there is not enough GIV allocated to those farms to pay out any more rewards post-attack. 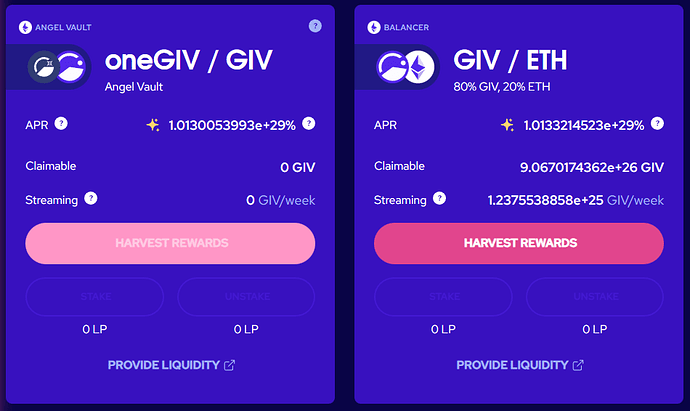 We have a team working on getting a full understanding of exactly how much rewards each address still had to claim at the time of the attack, and it is our intention to give those farmers what they earned.

In the meantime, we also need to decide how to proceed with the GIVfarm, either by restarting these rewards programs and allowing them to run as expected, or by terminating them at the time of the attack.

We believe that the better path forward is to end the incentives programs “at the time of attack” for the following pools:

Yesterday’s attack has made reaching a decision on this time-sensitive.

Liked to have a discussion about them later. easier i think to END these no matter what. and if decided to continue to start fresh.
onegiv, be only if the routing aspect is fixed first. Tho, i enjoyed being in there. I’ll vote to end this for now, as it was under used.
Ending CULT, and redoing (i am not sure which is easier. fix current/or start fresh)
Ending balancer makes sense, as it was about to end anyway.
I am assuming this doesnt prevent us from setting up new pools in the future. (or i hope it doesnt) very much enjoy the givfarm setup. its fun, it feels like its a good way to garner LP.

tho it hurts too

onegiv, be only if the routing aspect is fixed first. Tho, i enjoyed being in there. I’ll vote to end this for now, as it was under used.

I think we should keep oneGIV (and all the GIV in the oneGIV multisig) all as-is… and keep the angel vault, just stop with the added incentives (unless/until the routing is fixed). The Angel Vault is a super cool concept, but it doesn’t really help us if people can’t use that liquidity on Mainnet. I think we should continue our partnership with Ichi and talk about improvments… maybe make a new proposal later for oneGIV utility or something else.

Ending CULT, and redoing (i am not sure which is easier. fix current/or start fresh)

The decision around Cult is up to the Cult team for sure. I personally think it would be great for us to redeploy & finish what we started for our partners. We can’t really fix what’s there, we’re need to end/redepoy, I think.

I am assuming this doesnt prevent us from setting up new pools in the future. (or i hope it doesnt) very much enjoy the givfarm setup. its fun, it feels like its a good way to garner LP.

This totally doesn’t prevent us from setting up new pools or incentives programs in the future, we can add more/different programs if it makes sense for the DAO! just thinking to end Balancer & oneGIV because they’re not giving us enough right now to justify the extra work. Not to mention - we’d need to allocated more GIV as incentives to make up for what was stolen.

Perfect, so all is as i thought.
Thanks!

The snapshot for this has passed!

We will proceed to officially end the oneGIV/GIV farm & the GIV/ETH Balancer farm on Mainnet.
Also we are still in the process of determining how much rewards to pay of the farmers who had earned before the exploit, and once we have confirmed those numbers will be sending out the appropriate amount of GIV for those addresses to claim.

I know the vote already passed and I think it’s fine to end the current incentive programs.

Im curious…
Are there any strategies for future incentivization of mainnet liquidity?
Do we feel confident that we have enough protocol owned liquidity on mainnet to not offer some type of incentive program?

Yeah, we are talking about this in the GIVeconomy research call. Our current strategy mainly focuses on token swaps, like one with Radicle or GTC.

We don’t have a lot of mainnet liquidity right now without incentivizing it, but since we have a lot of liquidity on gnosis, there is an arbitrage opportunity there. Anyway… we should still work on token swaps.

There is a chance to get buy side liquidity via a hodl vault… We are talking with Ichi about it.

We are happy to inform you all that if you were farming in the following pools and had unclaimed rewards on the block before the exploit, any GIV or CULT you earned has now been reimbursed in full:

As voted by in this post, we will not be relaunching the ended Mainnet GIVfarms, but plan to launch the Cult RegenFarm this week, and it will be set to run rewards for 2 weeks from the launch date (this was approximately the duration of time left on the original farm before the exploit).

We have reimbused CultDAO for any rewards lost in the exploit (taken from our RegenFarm fee).

Excited to be bringing this chapter to a close!

FYI The continuation of the CULT/ETH RegenFarm is up! (called v2) - anyone can now stake LP tokens in that pool to earn CULT until the program ends on Dec 1.