Mainnet Liquidity Solution Ideas (Now that Univ3 is being turned off)

As you are likely aware, we had some trouble with our original univ3 rewards program and the community voted to turn it off.

According to our dune analytics dashboard, we have about 4 million GIV circulating on mainnet, and about a 0.91million of that GIV is in as liquidity on Uniswap.

We need a good solution for mainnet liquidity to replace Univ3.

Some ideas that have been discussed:

Note that the proposal to provide DAO-owned liquidity on Univ2 GIV/DAI has got a lot of support and will likely be going forward soon.

I think it would be good to come up with a solution to get & maintain Mainnet liquidity… preferably before we shut off the univ3 rewards on March 21. Would be great to have an obvious place for that GIV to go.

Would love to hear ideas/suggestions.

I think we have problem of a very serious liquidity crisis. And it could happen during next few hours. 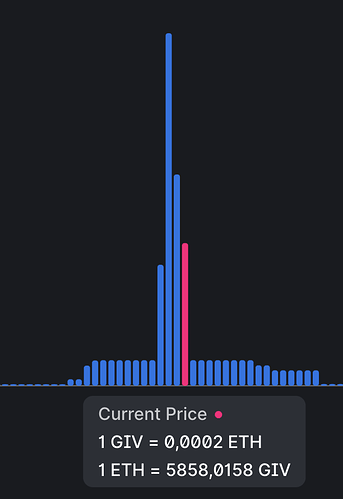 Those LP on the left side of current tick have their positions 100% in GIV, earning no Uniswap fees and no GIV rewards.

In order to get into current range, they need to swap those GIV into ETH, rather sooner than latter. Problem is the liquidity on the right side is comparatively very thin and unable to absorb this (and also will end up 100% in GIV).

There’s a chance that someone would just take those GIVs and stake on Balancer or just as pure GIV, but I’m pretty sure the “whales”:

This can cause an avalanche. Some of those who bought those GIV would be selling them again into thinner and thinner liquidity.

Meanwhile we have low liquidity on Uniswap, Balancer pool is only 20% in ETH and it’s even smaller, and while there’s quite substantial liquidity on Gnosis chain, I estimate immediately available buy side liquidity at 590 ETH. This is not concentrated liquidity, so the effect of selling even 200-300K GIV would be quite epic. I don’t want to spread fear, but I wouldn’t be surprise if I’d wake up tomorrow and see GIV price 30-40% lower than today.

What can be done?

Short term we can announce possibility of earning high APR on “good quality” token and draw some liquidity (most of newcomers would have to buy some GIV). This can be done on Reddit, it would be great if some highly reputable member of Giveth team post it

But, since switching off the Uniswap pool is voted in, at the end of the week we could face even bigger crisis, with more GIV available for dump and zero liquidity on Uniswap. I’d recommend reconsidering switching off Uniswap pool and instead plan for some migration: gradually building another liquidity pool while decreasing amount of the rewards for Uniswap.

I think launching rewards for a Univ2 would be the easiest option until maybe we think of a cool idea to incorporate the Angel Vault into the GIVfarm.

Honestly, I like that idea. Especially if we do like GIV/DAI on Univ2 since we are already initializing this pool ourselves.

The general consensus in the GIVeconomy call though was since we have so much liquidity on xDai, shutting off the univ3 pool won’t affect things too much… but will likely create cross-chain arbitrage… and then we should focus our efforts on pushing forward with the angel vault.

Still, I’m open to hear some more opinions on it, because if it’s quick to spin up a program for rewards on univ2… and we could do that within the next couple of week while we rally together with the angel vault… I think this would be valuable.

The angel vault seems like it will take some weeks to set up because we need to get a pretty large quantity of stable coins.

From the GIVeconomy Call, we discussed that setting up a Univ2 pool for GIV/DAI would be relatively low effort from a development side since the design is already prepared, we would just need run the scripts to deploy the rewards.

Next week is “week 13” of our 26-week rewards cycle. We have about 5M GIV from the Univ3 pool that we had pre-allocated to be rewards from that pool. You can see this in our docs

The GIV/ETH balancer pool had only 2.5M GIV allocated to it in total, and there is less than 1.25M GIV still left to give out because these rewards follow the “1 wave to rule them all” pattern, which changes every 2 week cycle.

My idea is that to make a quick-and-dirty solution for mainnet liquidity, we could:

The advantages would be:

I would love to get community opinion on whether or not this is a good idea… so:

Should we push to set up a GIV/DAI Univ2 farm?

Yes, this is important. I support the effort at the solution. I don’t fully understand it and so I voted maybe.

I abstain because I don’t feel qualified to vote on it. But I trust @karmaticacid and @mitch

While I understand the desire to increase liquidity on mainnet swiftly, I personally think it makes sense to focus rewards/liquidity/efforts on the upcoming Angel Vault. With the rewards for Univ3 having ended already and only 166k GIV remaining in the v3 pool, the worst is behind us. Rather than incentivize GIV/DAI liquidity on Uniswap v2, in which 50% of the GIV will be put up for sale, I think we will benefit more from incentivizing oneGIV deposits on UniV3 in which ~85% of the liquidity is in oneGIV concentrated right beneath the GIV price. Because LPs’ deposits on v3 will be concentrated, this should also result in a higher APR from trading fees relative to an equivalent deposit on v2.

I think the concern right now is with the Angel Vault there seems the be no clear start date… we still need to setup the rari pool, set up incentives, get the FEI, start the vault.

I feel really on the fence tbh about pushing forward with a Univ2 incentives program because I honestly just don’t know if it would help GIV a lot or not, and am personally lacking bandwidth. The idea that “the worst is behind us” makes me feel a bit unmotivated to push this without hearing resounding “yes’s”.

That’s how I feel… does it help us enough to allocate more farming rewards?

1 token swap with Fox will get 1 million in GIV liquidity protocol owned… Do we really need to pay a bunch of GIV to Degen Apes to get GIV/DAI liquidity… I’m pretty “eh” about it.

I think it will be super helpful in the short term to recover some of the liqudity lost from the Univ3 pool closing. Also there is the new incentive of having a stable pair for GIV as a less volatile way to park GIV. Having the “worst behind us” is nice to know but we should find some near-term solutions now that we recognize that the Angel Vault is going to take time and is much more complex to deploy than we thought.

I would propose the solution @karmaticacid wrote a few weeks back for the GIV/DAI v2 Pool.
With the aforementioned specs: