As the Giviverse celebrates its first 1% of expansion, I’d like to share an idea to expand the GIViverse… to the Multiverse 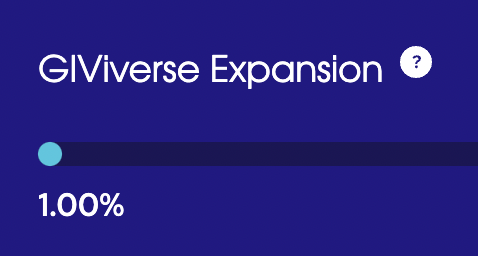 The core idea is simple: add a new section to the GIVfarm and GIVstream for partners, and enable partner DAOs to launch their own liquidity mining programs with their very own streams.

There’s no catch for the DAOs, and this could potentially be a public service provided by Giveth. But while there doesn’t have to be any fee, I think a small suggested donation to Giveth’s treasury could be justified. That donation, let’s say 1% of the total liquidity mining rewards allocated, could not only provide a healthy stream of valuable governance tokens to Giveth’s treasury, but would also keep participants of any of the partner pools engaged with the GIVeconomy for the next 5 years. These participants are all target participants for the GIVeconomy, and the ability to secure some of their mind share and retain them as active users over the next 5 years would be incredibly invaluable to us.

Incentivized pools in the partner section of the GIVfarm could include any pair (ie. HNY:FOX) including but not limited to GIV. If a pool includes GIV (ie. GIV:FOX), Giveth can choose to allocate some of the GIV we have earmarked for future liquidity mining to these programs, and if the partner matches, we can reduce each DAO’s personal costs for liquidity mining. @monstrosity inspired this idea when he reached out about a potential joint liquidity program for GIV:ELK and asked whether the GIVfarm could be expanded to support additional pools and could support dual rewards as well as whether these rewards could tap into the GIVstream.

@amin confirmed that not only could we do this, but the GIVfarm and GIVstream were designed to support this, so the lift should be relatively low. We would also need to design these partner sections into the GIVfarm and GIVstream, and @markop has already planted the seed in the design team’s mind. If the concept is a hit, we should be able to add new farms and streams with ease; certainly much easier than it would be for another project to launch a farm and stream themselves.

Lastly, while totally unrelated, I feel like this concept could go hand-in-hand with tokenswaps. To kickstart a liquidity pool, GIV and the partner DAO can engage in a tokenswap and pair the tokens we each receive with more tokens from our treasury to deposit into an LP, creating protocol-owned, revenue generating liquidity for each DAO. While this wouldn’t be a requirement for projects interested in launching their own streams, the streams could act as a nice funnel to bring tokenswap dealflow to our doorstep. @hotl.eth has already set the first of these tokenswaps into motion with BrightID.

If we DAO this well, every cool DAO will want to do a tokenswap with Giveth and launch a GIVstream, because it’s for GOOD and GIVing is cool. g00d…dA0z! Lot’s of DAOs want to do good, but this enables them to do good without being benevolent altruists, which could lower the barrier for getting proposals approved by their governance.

As more DAOs launch on Gnosis Chain, the demand for liquidity on DEXs will continue to grow. “Liquidity Mining 2.0” protocols, such as Olympus Pro and Tokemak, are some of the hottest, most in demand services for DAOs at the moment. Giveth has created an elegant evolution to traditional liquidity mining that

Looking forward to hearing everyone’s thoughts and feedback on the high level concept. If we agree this has legs, here is what I recommend for next steps:

What do you think of the overall concept?

What should it cost a partner DAO to launch a farming program and stream? (can select multiple options)

Hey @amin, @monstrosity just had a question. Is it possible to increase the rewards for a farm program after it is launched? In other words, if we launched a farm with ELK that was incentivized with 5000 ELK over 3 months, and it’s going so well after month 1 that they want to add another 5000 ELK to be rewarded over the final 2 months, could we do that?

Generally in support of this idea and proposal, already voted.

How do we make sure we don’t end up looking like just another Defi Farm? How do we effectively present this to crypto newcomers?

Is it so bad if it looks like another DeFi farm?

There are not very many DeFi farms on xDAI right now. There is the Honeycomb farm, but the APRs are very low. The cool thing about the GIVfarm is that it should generally have higher APRs, and I think the UI/UX we have for farming is already really good. 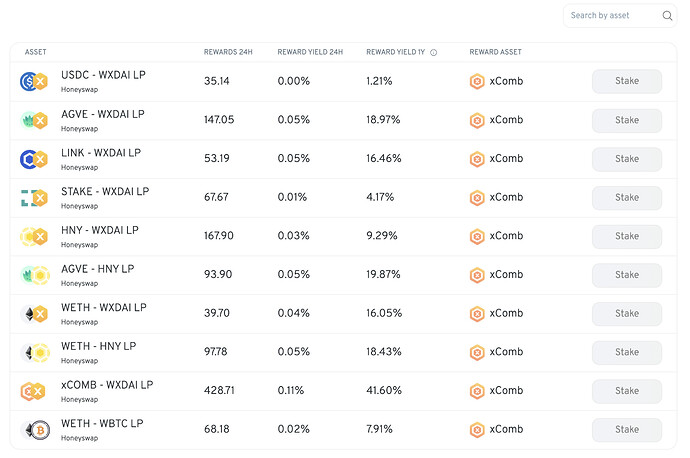 How do we effectively communicate existing and new Giveth users the benefit of investing in other DAO’s?

This is a great question. I think at the very least this deserves a blog post that I’d be happy to write, so we could link to the blog post from the UI.

Maybe we add a section below the GIVfarm titled “GIVfrens” with a short description like, “Explore a multiverse of projects changing the world and earn rewards for staking liquidity. Learn more.” 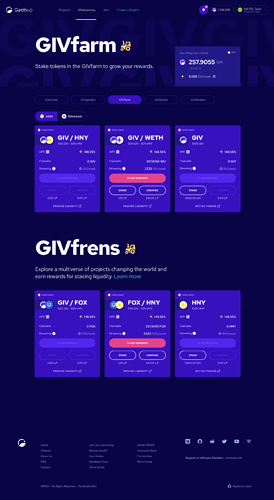 Just some ideas to get the ball rolling; but I think something as simple as this could work

@markop I also liked your idea to include something like a tooltip for each farming opportunity that could include some info on the underlying strategy. We could require that projects provide this blurb. 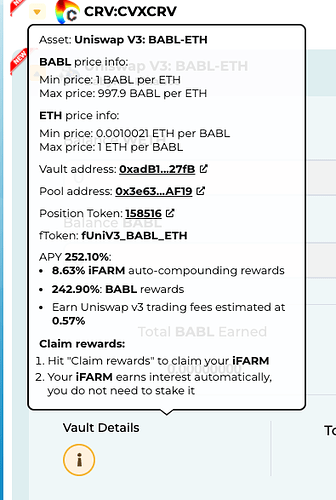 Is it so bad if it looks like another DeFi farm?

Just thinking that instead of the standard Pools table we could actually promote the DAO behind it and make the pool info less prominent. IDK thinking out loud here. We’ll see.

I think this is such a good idea! If we keep the flow that Willy suggested, we could maybe just add little “Learn about this DAO” links that are popups with some explainer about how they add value to the Blockchain4good ecosystem. And those popups could open a link in a new tab to their site.

I think it’s important to highlight the DAO’s impact, it’s really in-line with our “community” value and the idea of collaboration.

Yasss maybe we have two toolips:

now it’s already better than every other DeFi farm

The unipool smart contract which we use for farming purposes has a constant duration period to distribute reward tokens evenly over that duration. We can split farming time into shorter slots and recharge the farm at the beginning of each one. So yes, it is possible to add more reward tokens in the next slots and increase the reward rate.

Love this idea! This would get a ton of use

It’d be cool if rewards could be in any token and could be added by anyone, so DAO friends could hook each other up.

Love that idea! I agree, the GIVfrens farms and GIVstreams should support any mix of rewards for any staked token or LP token. @amin, question from @monstrosity, what about triple rewards? how many rewards can a single GIVfarm have? Is there a max number of tokens the GIVstream can handle?

Feedback on the concept has been great so far!

In fact, we have consensus from the joint FOX/HNY multisig managing our protocol owned liquidity and 334,068 FOX ($144,600) to allocate it towards farming for the FOX/HNY pool if the GIVfrens multiverse comes to fruition. Let’s DAO it 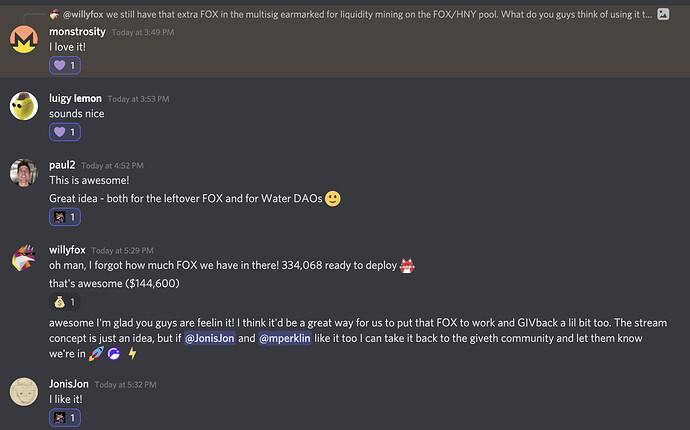 Thanks for the answer @amin

Your understanding is correct. There is also interest in rewarding two unique tokens for a single token staked in the farm. Is that possible with the current contracts?

No, the unipool only does accounting for single reward token! And when it comes to paying the reward, instead of sending directly to recipient asks tokenDistro to allocate the value.

The first resort would be changing tokenDistro and when it wants to send reward, it sends multiple tokens instead of one! However, it’s not ready and we should work on it.

Ah thank you for clarifying @amin, I thought it was already supported. Good to know that it’s at least possible with some work if we see strong interest in this (I know ELK is interested)

Bringing in some ideas from our discussion in the discord over the weekend and our GIVernance call - I would like to see this initiative roll into the giveth mission of supporting for-good projects. 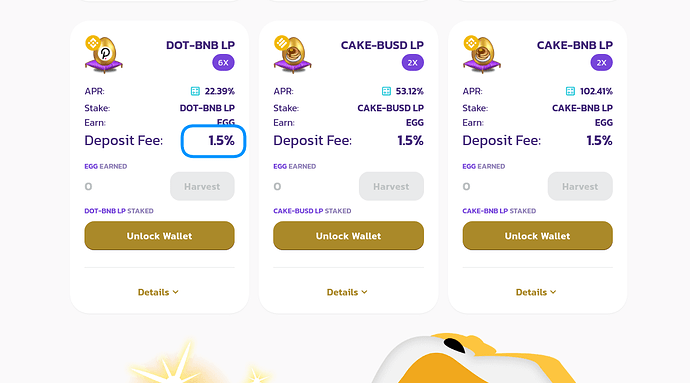 a prime example of degen mechanics

It would be awesome to connect the degen to the regen by levying a similar fee on farming LP deposits and using them for:

This, in tandem with levying a small percent from DAOs who want to participate with their token to GIVmatching will ensure that DAOs and degens (not donors) alike will contribute to funding philantrhopy projects and the future of giving.

This would be a possible solution that would make me definitely more comfortable for priority development of this idea and an expansion of D2D relations.

Just finished reading everything in the discord and though I’d put my 2 cents in here, just want to signal support for the implementation of this… partnering with other DAOs, attracting people to use the farms and then keeping them interested with the 5 year stream… I think this is super valuable networking… and also aligned with the goal of educating and bringing web3 tools to projects on the ground…

Projects who are receiving donations can also use them to take advanage low-risk opportunities in the GIVfarm to gain a yield. This also encourages projects to investigate and learn more about partner communities who are doing good work… piquing their interest in web3 and prompting them to learn more.

I think charging a 2% fee to DAOs wanting in (and no fees ever to users) is a great idea… 1% going into Giveth and 1% going into the GIVmatching pool (forum post coming soon explaining that)… then… funds from communities on the GIVfarm are being used also to fund projects on Giveth.

I think adding fees onto the farm is kind against one of our core “zero fees” for users concepts… If we really want to go with this approach, I guess we could frame it like a “for-good donation”… instead of a “fee”… but then it’s sort of awkward… the funds would go to the matching pool and then should maybe get GIVbacks no?

Things get weird. I much prefer charging fees to DAOs who want in.