Giveth Info: An analytics tool for the community

We are proposing the development of Giveth Info - a platform to track and display Giveth stats such as number of donations, total raised by projects, number of projects created, and much more. This tool will also provide features for analyzing specific Givers or Projects, which will help curate details and understand where Giveth is heading.

We’ve seen community members looking for a tool to analyze Giveth metrics, especially after GIVbacks rounds. Nowadays, members have to dig into different sources to answer questions and make decisions. We believe Giveth Info will be the one-stop-shop for Giveth’s information. Furthermore, as a community-owned application, it will decentralize Giveth’s development.

We’re compromised with Giveth and guarantee that the development team will be available for the next 3 months - after project delivery - to fix any bugs or make minor improvements.

* I’m not going to participate actively in the development given my short band-width. This app is an idea I’ve had since the Dune dashboard I made for GIVeconomy and I finally found a team able to build it.

Ethereum address where funds shall be transferred:

More detailed description of how funds will be handled and used:

I think this platform can be a great source of information for us and for our stakeholders: Donors, NGOs, Token holders and Builders.

I really like the info in the Dune dashboard.

Thanks, @mendesfabio I think we need analytics, I only have these comments:

1- As you know building the Data dashboard is not a big deal, it does not even need a UI, there are lots of Tools for gathering these data around with a comfortable, configurable feature, not even needed to have an update for the design team to add sorting/filtering. Lots of charts and so on. I think right now we have Segment Tools in the code, you can take a look. we have to configure it in V2. But it can be a very productive shortcut rather than building from scratch.

2- We have the user tracking problem on both Frontend and back end. The problem is Brave browser usually blocks this kinda user tracking and we have to bring events to the backend. So we need the analytics and events to be clarified on the backend to have this sense of tracking.

Generally, I think in product management, it’s not about building, it’s all about maintaining. we change our backends fields regularly according to coming features and improvements, so I think you need to maintain it every 2 weeks and it’s not going to be a reliable product after a while.

So I suggest, instead of inventing the wheel, you guys work on segment events with @Cotabe to make sure we can cover all user analytics from the backend and frontend sides. It’s very badly needed and we love to have it.

I also can hep you guys, the expected data needed to be reached from this analytic tool.

I appreciate the proposal, actually I feel we need a dashboard to track what’s happening and collect data for decision making. Nevertheless, I believe giveth backend is changing regularly and we have some tools in place to collect data and display them.

Furthermore, we have had hiring recently and have added more developers to the team. I believe filling their bandwidth is a priority and these kinds of task can be handled inside.

I also want to add we’re using Amplitude with Segment, I suggest you guys carry the flag over it , @mitch owns it before he became the DAO Steward

I appreciate your thoughts but disagree in some parts. 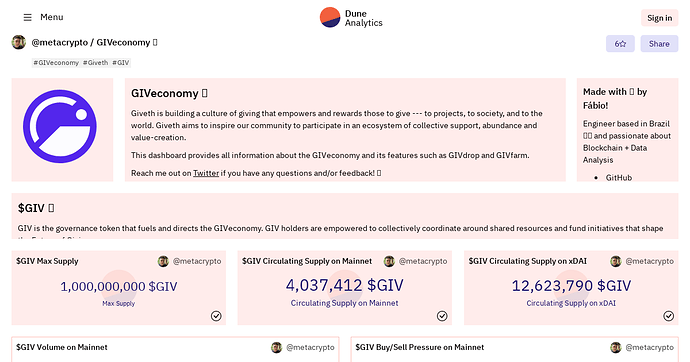 Blockchain ecosystem analytics by and for the community. Explore and share data from Ethereum, xDai, Polygon, Optimism, BSC and Solana for free.

I can say that Amplitude has been thus far an unreliable tool because of the lack of development/understanding of segment and making sure it works properly with our backend.

I’m not sure how a standalone platform for analytics would be helpful - I think having some reliable APIs that can be integrated with our current platform UI would be super helpful, that along with a simpler backend analytics portal that reliably works would be great additions.

I fear that a new platform with a beautiful UI would get lost inbetween other giveth features such as the donation platform, the docs, the gardens and the giveconomy

@MoeNick, besides the Dune dashboard @mitch sent, we have a Metabase hosted at http://dashboard.giveth.io/. I can provide you guys credentials to access, or feel free to head over to this public dashboard.

@mitch, I share your concerns about this getting lost between all our features, but that’s why I would like to concentrate the data at Giveth Info. I have built cool stuff for Giveth that’s not being used because the information is spread across different apps/URLs/etc.

I love this proposal, we can make it a stand alone thing to start, but I would love, once it’s up to integrate it more directly.

I think it is important that we can decentralize our development and work with other teams, this is a great opportunity to make progress on this.

I do think we need to bring in some design support… I also don’t think we need a stats page for the projects or the Giver’s page… that should be a native part of the DApp and I think it would be inefficient for your team to take that front end work on, but the other pages would be AMAZING for us.

I agree we need design support. After last round of front-end hiring, we have an army of devs and not enough design to fill their bandwidth at the moment. Nevertheless, GIVpower is coming and we will have enough tasks after for them.

I can say, I get convinced over Governance Meeting Discussions that having another priority (like user tracking) is not a blocker to proceeding on this. However, as a product expert, I can say, Let’s use Segment and customizable dashboards and include maintenance efforts in the proposed budget. (Hope these technical comments won’t be inferred from having a resistance over it.) @Griff @mendesfabio

Awesome proposal @mendesfabio! I’m a huge fan of your work. The dashboards you created for The GIVeconomy and for GIVbacks have been extremely valuable, and I think having a consolidated place for Giveth stats would be extremely valuable.

I love this proposal, we can make it a stand alone thing to start, but I would love, once it’s up to integrate it more directly.

+1 to this: Long-term I think it would be best to have this information integrated with the rest of the application, but if it makes thing more simple, developing it as a separate platform & intergrating later makes sense… I would just emphasize this long-term goal so that the tool is built for that.

From the figma, tbh it looks like like it fits right in with our branding. Design resources are scarce at Giveth, so I would suggest that our designers like @msaeedi and @Tossynee should only be used for review purposes… and if additional design is necessary, I think it would be best if you guys added to your team @mendesfabio.

Also @mendesfabio I would love to see Giveth info include some of the data from GIVbacks (rounds, etc)… Perhaps if you take out the donor stats, you could add in some GIVbacks stats.

Overall, I fully support this idea, think it can definitely be built by your team as external development w/ integration, and I would be very happy to oversee & provide advice as needed.

I really appreciate all feedback

We’re addressing some suggestions - soon the proposal will be updated!

@MoeNick I will include maintenance efforts in the proposal.

@karmaticacid We’re removing the Giver/Project stats in favor of GIVbacks and other metrics. I also don’t think we need designers, other than for reviewing purposes. Giveth has a well-established Design System that makes that work much easier - we don’t need to reinvent the wheel but follow the patterns. I can confirm we’re aligned on the long-term vision as well. All front-end is going to be developed using the same stack as Giveth currently uses - making it easier to integrate if the community wishes.

So excited about this!!

Can’t wait to see the new proposal and get it going!

Hi all. First, I just wanted to introduce myself before I jump into this conversation. My colleague, Dawid, and I were the recipient of this grant: Proposal - Monitoring Tool to Help Identify and Mitigate Recirculating GIVbacks.

I love the idea of a dashboard, of course, being a huge proponent of transparency and openness–especially for the charitable giving space. I think it’s super important.

But…and I want to be respectful, so if it doesn’t sound like I am being, please understand that I’m trying…I think a dashboard and analytics platform run by the ‘centralized’, ‘project-team’ goes in the wrong direction, if you want to be (a) decentralized, and (b) truly open.

If I had my druthers, and of course, I don’t, I would rather see effort expended towards making that analytics platform as open as possible. So, instead of a system that is run by people inside the organization, a system that purposefully exposes itself to the outside in as broad a manner as is possible.

So, while I think the idea of a grants dashboard is good, and it does “open” the organization to more scrutiny, I’d like to see efforts to build analytics platforms that don’t rely on a small team but instead purposefully open up the data to anyone who wants it without asking.

Along those lines, I present this: https://tokenomics.io/giveth. It’s rough and quite rudimentary and it’s totally centralized now, but we’re working on a dAppNode version that would run directly against Erigon and produce exactly this type of data. It currently scrapes not only the “Giveth System” but all 1,200 of the individual grants in the system.

I’ll update the status on the proposal post soon, but I just wanted to “barge in” to this conversation and hopefully get some feedback on my admittedly unusual perspective.

Honestly I don’t believe that a system, only for being built by a project team, is against decentralization and openness. Making Giveth decentralized/open means that, in my humble opinion, anyone can hop in and start building on it. Giveth Into is community-owned and open-sourced from inception - you will never see us working behind the scenes.

Hey @mendesfabio, what are the next steps for this proposal?

We appreciate everyone who reached out asking for the next steps on Giveth.Info. I’ve just updated the proposal to include a maintenance period and revised the project’s scope. We’re going to work on a standalone analytics app that has the main features community is looking for. After delivering it, we’ll get back to you all to gather feedback and the next steps - e…g new features and Giveth integration

Propoal is live on GIVgardens!