Barcelona is Giveth’s unofficial home town, and finally an Ethereum Conference is coming to us!

Here is the deck with the all the info:
https://drive.google.com/file/d/1u8aGUWpnkd0L71aM_vcZ8MMy09y_TZeo/view

Here are the main sponsorship opportunities: 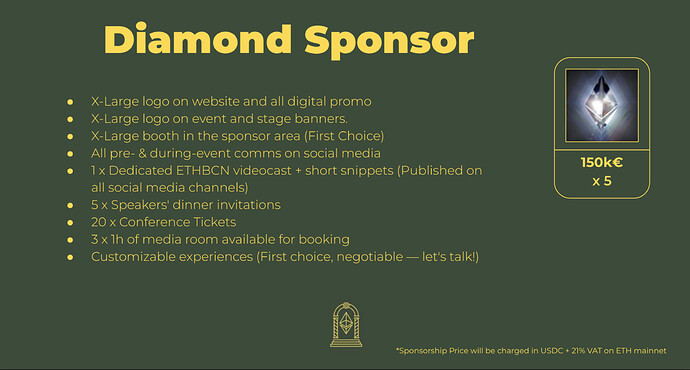 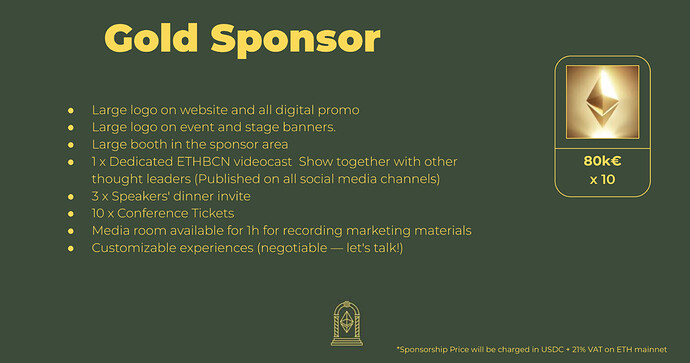 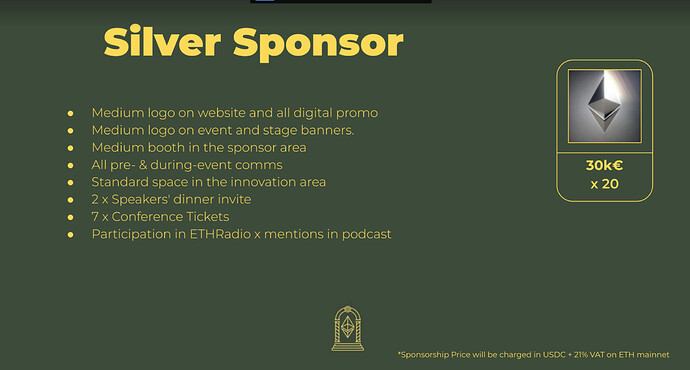 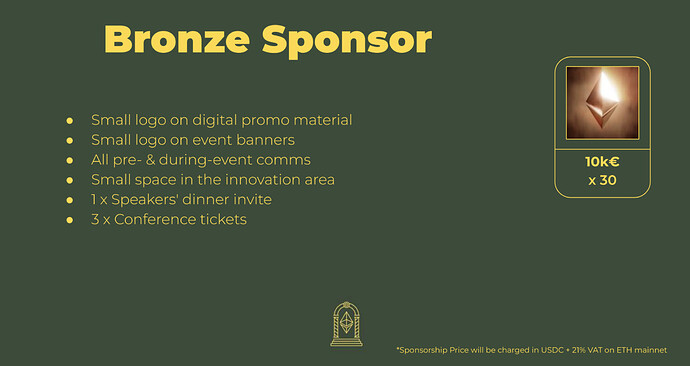 There are also some other sponsorships we can consider: 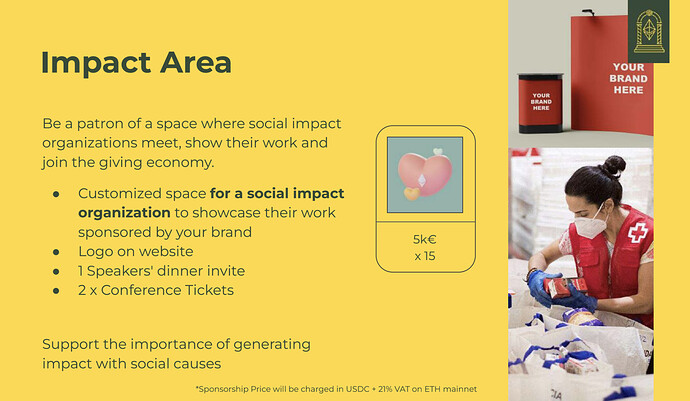 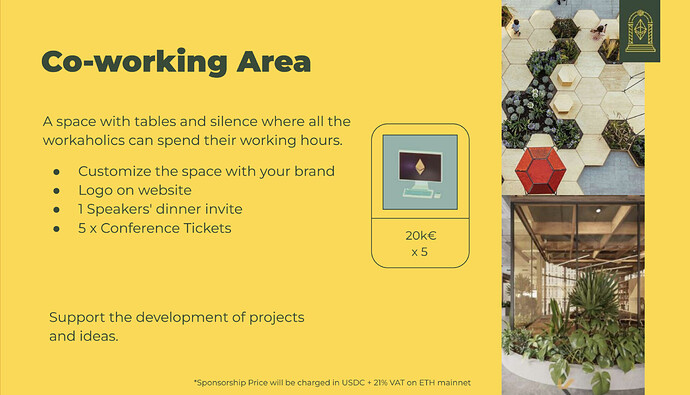 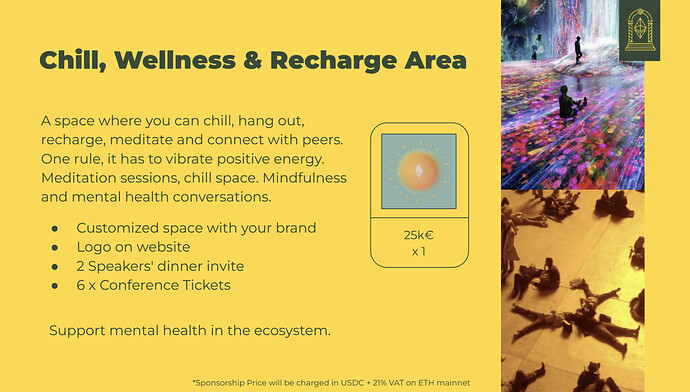 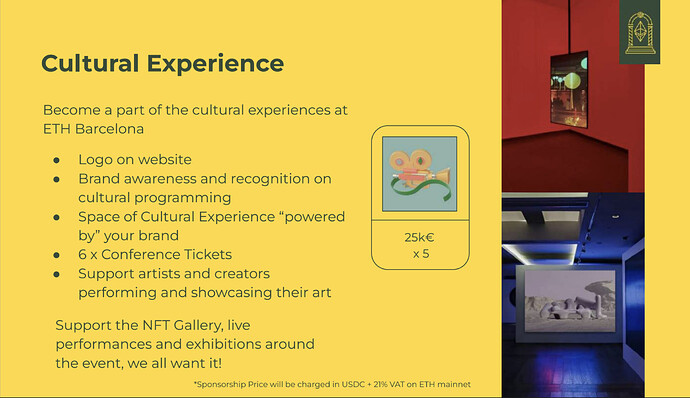 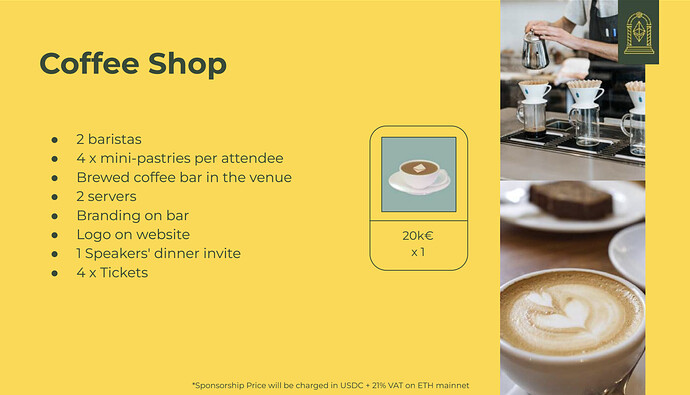 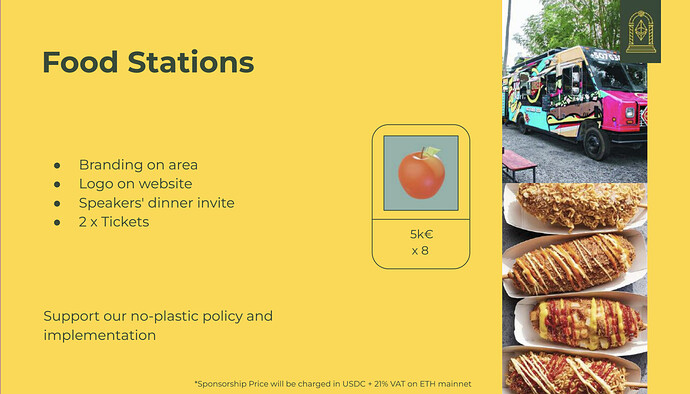 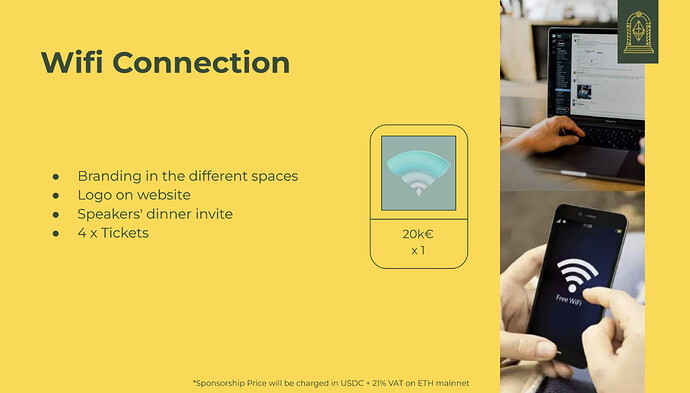 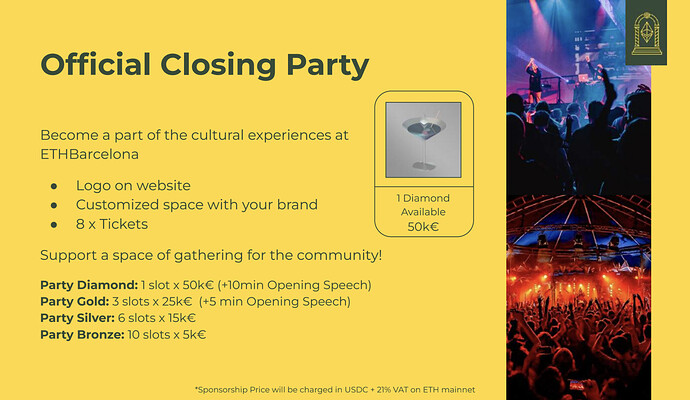 Should We Grab One Of These Special Sponsorship Packages? Pick the ones that seem the best to you (Max 3)

How many attendants are we expecting in this conference?

The expectation is 4000 people

I think your poll options are a bit misleading, I don’t think it’s a waste of money but frankly Giveth can’t afford it.

So in theory, we would sponsor from the GIVgarden, and then what happens to the GIV? They sell it for Euros & spend it? Or is there someway that we can sponsor and they keep/stake some of the GIV.

I think we’re going to have a big part of our team at ETHBarcelona & that the extra logo exposure & mentions would be valuable… but before we sponsor we should work out a strategy for exactly what that would mean for us… what our conference goals are.

If we settle on goals, we can have an organized plan of action and see which level of sponsorship would support that goal most.

I love this event, I support the crew there, they are all our friends. I think we should sponsor the event.
However, I find their packages to be very expensive for what they’re offering. Maybe it’s just me but $30k Bronze sponsor and you get only 3 tickets?

I vote for Impact Area sponsorship and maybe Cultural experience.

Also, echoing what @mitch said, although I don’t have info on how much we really can afford.

What @karmaticacid said, I believe we need to set some targets and measure the outcome of the conference based on the metrics we decide are good for us. That way we will know:

You mixed up the silver and bronze tier!

Traditionally we have made great impact by coming in with a massive team and aligning the pitch - which means coming up with a metric to improve and customize the pitch for that.

We always did it the underground way before and I do think this should be standard mode whenever we can visit a conference - tell people about Giveth with some schwag in our pockets … DEMO the thing!

However - this time I think it would pay off to actually go for one of the lower tiers. Whatever we do - I think we should subsizide some tickets, so if we go with bronze we should buy additional ones.

Also - we should form a working group promptly to get the team to Barcelona without much hassle.

I agree with @markop and @mitch - I feel like the big sponsorships are very expensive particularly for what they offer.

I think the impact area or coffee (EVERYONE IS DRINKING COFFEE ALL DAY LONG! er… except me actually…) if we want to do an official sponsorship.

In terms of marketing value, as @karmaticacid said, I wonder what the trade off is here. What do we expect or even wish for?

As @geleeroyale said, the biggest impact ultimately comes from our own presence and swag and networking.

Best was when we hijacked Web3 Summit

Coming from the “Bracelet Bandits”
in other conference that I won’t name for legal reasons
I’m in for a hijack!

Thank you for the excellent feedback!

So in theory, we would sponsor from the GIVgarden, and then what happens to the GIV? They sell it for Euros & spend it? Or is there someway that we can sponsor and they keep/stake some of the GIV.

They said they have to sell it, so if this proposal passes I will work with them to use the OTC so it doesn’t effect the price.

What @karmaticacid said, I believe we need to set some targets and measure the outcome of the conference based on the metrics we decide are good for us. That way we will know:

I love this, and what @geleeroyale said as well… when we get closer, we should choose our goals and build metrics for them!

We always did it the underground way before and I do think this should be standard mode whenever we can visit a conference - tell people about Giveth with some schwag in our pockets … DEMO the thing!

However - this time I think it would pay off to actually go for one of the lower tiers. Whatever we do - I think we should subsizide some tickets, so if we go with bronze we should buy additional ones.

Coming from the “Bracelet Bandits”
in other conference that I won’t name for legal reasons
I’m in for a hijack!

We have been highjacking conferences for 5 years… I think now that we can pay for it, we should! Score a Table, have a clear gathering spot in the conference and support them in actually paying for the event that has lots of synergies with the Giveth Home in BCN.

Barcelona is our hood and I think this even is a cause that we should support as much as we can! If our market cap were larger, I would be totally push for us to be a diamond sponsor… but it’s not. So we can’t. I think we settled on Silver, the Goldilocks option.

57% say take a big sponsorship in some way (Bronze, Silver or Diamond)

If you disagree with this, you can effectively vote no by putting your GIV on abstain.

I used a fresh address and asked for 215,000 GIV (about 43k with GIV at 20 cents) so that we can pay for the VAT and handle some downward price action… I will send any excess GIV back to the Garden.

I’m Manu, one of the Founders of DoinGud and I’m helping out with the whole organization of ETHBarcelona. For those that don’t know me, I’ve been in the space for some years and have contributed to multiple DAOs, created FightPandemics.com with volunteers from all over the world and have also contributed to the very beginning of the TEC. While building FightPandemics I thought that we could create a platform where media could have the potential of giving back and that’s how the idea of DoinGud came out. During the lockdown, we started building DoinGud with founders in different parts of the world, and tried to meet as much as we were allowed between Barcelona/Madrid and in one of my conversations with @Griff, he opened up the Giveth house for us. It’s fair to say that DoinGud had its origins at the Giveth House which I also consider my home and we at DoinGud will never forget that. I will make sure that we pay it forward to this beautiful community that I’m also a member of.

Coming back to ETHBarcelona, we are a core team of 15 people (Engineers, designers, curators, communicators) that have come together to make this event focus on web3 and the culture that we (Giveth, Commons Stack, Gitcoin, Toucan, DoinGud and others) envision. We want at this event that web3 is not only about ponzi defi but that it also has a culture of giving, regeneration, public goods, value creation and that’s why we have made it super SolarPunk.

We have rented the CCIB which is a super beautiful venue for holding this event, also we have hired one of the top event producers in the city which is Giant Cookie, they have produced a lot events for big brands like Unesco, Futbol Club Barcelona, Microsoft, Twitter and others.

I know that the prices aren’t cheap and more for all of us who are working in the giving economy space. Sadly, Barcelona is a super expensive city. However, I really believe that if we all come together and we show to the region and to the community what we are all about, we can make a huge impact in the years to come. Let’s please work together to make sure that we can make the best out of this conference.

Let’s invite as much media, builders, students, and even those that don’t like crypto (regulators) to come and see that we are here to create a better future for all of us and that they are also included in our vision.

I really believe that we need to rally together and make sure that our sector is a sector that people want to join and be a part of it because we believe in abundance.

The idea of ETHBarcelona has been to really give back to our communities. For example all the sales of the NFTtickets on DoinGud are collecting 5% to a pool that we can collectively decide where we donate and I believe we can do this together with the Giveth family.

Again thank you Giveth community for being such an inspiration and for opening me your doors always.

I want to change my commentary in this thread after seeing this amazing tweet of brilliance. 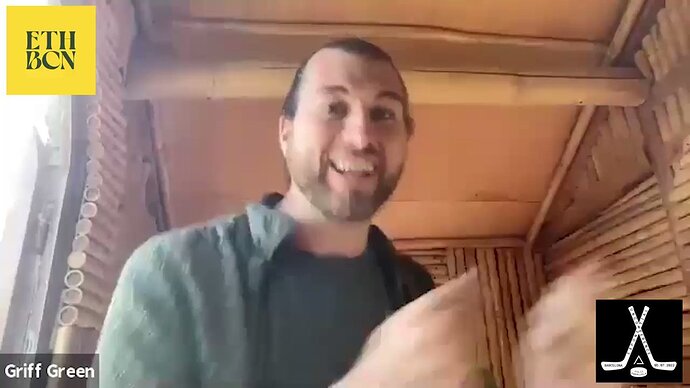 (Must see the video.)

@ManuAlzuru I was already a fan of this proposal, and was also feeling these tiers are pretty pricey…

Your response really brings me back to the spirit of why Giveth is at home in Barcelona, this event really nails the bridging of the Ethereum ecosystem, the Blockchain4good movement, and the pioneering decentralized governance aspect of BCN itself.

Also - as @griff rightly states we’ve been doing the underground underdog thing for years… let’s show up fully onboard!!

It would be helpful if we are clear on: 1) what’s the biggest challenge for Giveth? 2) How can we resolve it? 3) will EthBarcelona help? From what I’ve seen, Giveth wants to grow giving on the platform and the event may be an excellent opportunity to get more donors and get the right messaging about what Giveth is and how it is different from other giving platform (smaller grassroot projects + giv backs).

So to me, sponsoring really make sense as this may have the highest concentration of crypto donors and THE event to be for people who are like minded to get to know the Giveth culture and resonate with it. What’s more important is a strategy on how to get the most of it and get the right messaging and positioning out. I feel that the current messaging (Giveth is for everyone) may not be resonating enough. This is the chance to make a different stand with the top donor/user level members. All for sponsoring, Impact Area makes the most sense, but more importantly, how we should take advantage of the event and achieve some real results afterwards.

I believe we have to get involved in whatever way.
I agree we need to set goals and get the best out of the investment but it is a great opportunity to be part of the event and we should not miss it.
I am aware sponsorships are quite expensive but we should try to work out a way to participate.

Damn… Lots of things went south on the first proposal.

215k GIV is only worth about $25,500. I already sent that to the otc… to keep things simple, i’m going to cover the rest and lock in the GIV price purchase for the DAO as the same as today’s OTC rate, 11.8 cents.

Here is the invoice from ETHBarcelona: 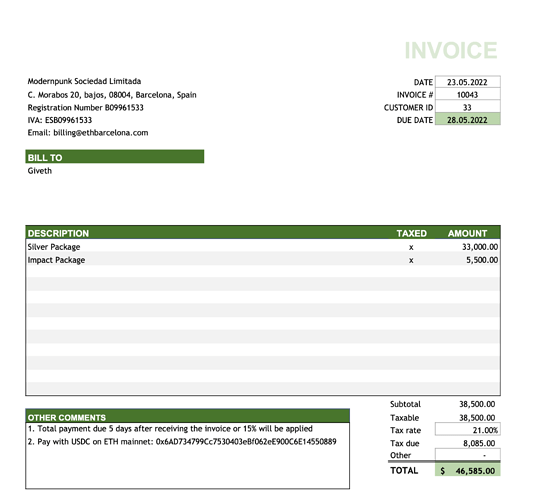 Here is the Top-Up vote: