Given the current state of the crypto market and the volatility of the GIV token, we want to reintroduce the Angel Vault as a simplified launch proposal, representing the culmination of a few months of discussion in mechanism design that we hope will create positive dynamics to support the Giveth ecosystem.

Anyone in the community will be able to add liquidity to the vault to earn rewards that are proportional to the amount of liquidity provided. The Angel Vault will provide significant liquidity for GIV on Uniswap, and protect the GIV token from downward volatility thanks to a moving “buy wall”.

The Angel Vault will be a structured Univ3 liquidity program, primarily managed by ICHI but with management power in the hands of Giveth core team and 2 members from ICHI in a 4/7 multisig.

The Angel Vault will be created using GIV & a yet-to-be-minted GIV-backed stablecoin, oneGIV. To set up the Angel Vault, the Giveth Community will create a large Univ3 position “buy wall” that consists of about 10% of the total market cap of GIV. This Univ3 position will help protect the GIV price from downward volatility if there are large sell orders.

Anyone will be able to add liquidity to the Angel Vault, and will earn a yield in GIV for doing so.

The Angel Vault will be based around Univ3 liquidity for GIV/oneGIV pairs. oneGIV will be a branded stablecoin backed by initially 100% DAI, and overcollateralized by GIV. Anyone will be able to mint oneGIV using $1 of DAI, or burn it for $1 of DAI. All these mints & burns will happen with a contract managed by a multisig of Giveth core team members.

Approx. $400k of GIV will be held in the oneGIV contracts (managed by the Giveth oneGIV team multisig) to be used as excess collateral in case there is an issue with DAI. Over time, the multisig may want to change the minting ratio so that minting oneGIV will require some % DAI and some % GIV.

Demand for oneGIV will be created through incentives for adding to the Angel Vault & perhaps additional incentive programs (such as oneGIV/xDAI) in the GIVfarm. To start, the only market for oneGIV will be against GIV, so in order to take advantage of Angel Vault rewards, people will need to sell ETH (for example) for GIV, and then sell GIV for oneGIV. Because 1 oneGIV can be minted/burned for 1 DAI, this also creates an arbitrage opportunity.

The DAI required to initially back the oneGIV to set up the Angel Vault will be provided by “Angel LPs”, i.e. backers who provide the stables to kickstart the program. They benefit from getting Angel Vault LP tokens that they can stake in the GIVfarm to earn rewards.

For more on the subject, there are interesting techniques and opportunities presented by oneGIV, explained at length here.

Angel Vault & oneGIV? What does that mean for GIV holders?

If you recall, we turned off our original Univ3 incentives program after learning that standard Univ3 programs benefit expert liquidity providers significantly more than the average user. This solution works to solve this, offering fair rewards to liquidity providers while getting the benefits of Univ3 liquidity.

A Note: The “Regen Pool” has been put on the shelf

If you’ve been keeping up with this discussion, you’ll recall that we were discussing getting the DAI to collateralize oneGIV initially from a borrowing/lending Pool called the “Regen Pool”. Sadly, Rari has turned off borrowing for Rari Fuse pools as a result of a small exploit, and given that their CEO recently resigned. We have negative trust that borrowing will be turned back on soon.

We have this as an option in the future, but for now, since 10% of the market cap is much less than it was before, we can still move forward with the Angel Vault program, without depending on the Regen Pool.

As mentioned we want to encourage our community to add liquidity to the Angel Vault so we’ll be providing an Angel Vault LP incentives program within the GIVfarm. When people stake their Angel Vault LPs, they will be able to earn a yield in GIV. Similarly to our other farming programs, part of the earnings will be distributed via the GIVstream.

We hope to sustain around $400k of Angel Vault liquidity with APRs of about 125%. We assumed a GIV price of $0.04, meaning we will need 6 million GIV for a rewards program of 6 months. These calculations are reflected in this spreadsheet

The Angel Vault and corresponding rewards program will:

It is requesting the following from the liquidity mining multisig:

Should we start the Angel Vault & corresponding incentives program?

This forum post was written by @toddxy & @karmaticacid with significant support from @Griff , and feedback from @yass.

I really enjoy the simplified version now without the Regen Pool. Let’s try it out!

If the managed Univ3 pool proves effective we could move the GIV/DAI LPs from the NICE token revenue to GIV/oneGIV LPs.

Great summary followed by a great breakdown - bravo to Lauren, Todd, & the rest of the team who helped bring the to fruition! Very happy to see the awesome support on the snapshot.

The vote has passed with overwhelming support in Snapshot! We’ll be moving forward with setting up the Angel Vault this Wednesday w/ @Griff & @yass

The Angel Vault is not your normal LP position. Lauren and I hacked on how we are going to do the rewards in this spreadsheet:

Here is a walkthru: 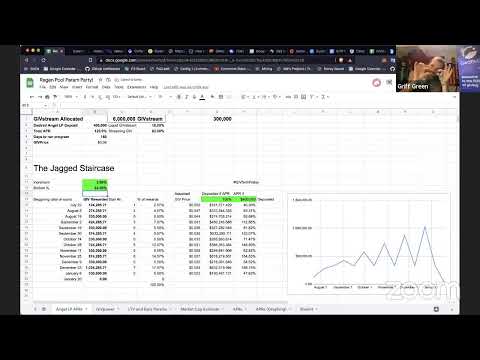 In Short, we will reward an alternating amount of GIV (via the GIVstream) at these rates 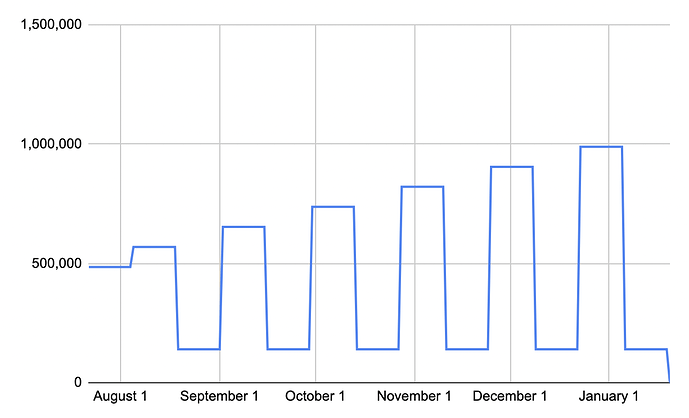 Are there any potential vulnerabilities to the Angel Vault when rewards and perhaps angel vault liquidity is low? perhaps a market shift sends the giv price spiralling during one of these liquidity dips, it would be much harder to recover.

Is the mechanic of offsetting IL in the GIV/oneGIV LP for stakers worth the risk of being exposed for half of the program, albeit intermittantly?

From Research call discussion - to maximize transparency, show jagged staircase chart front and center at the deposit user interface. Maybe have a start showing “you are here”, perhaps a feature where you can scroll over and see APR/Date at any period on the staircase.

Thanks for all the amazing work guys @Griff and @karmaticacid this is great.

Also thanks @mitch for raising the point of the vulnerability on the liquidity dips. I was thinking about it and I believe the risk doubles because people just removed liquidity on a mix of oneGIV and GIV, so they might be selling a lot of the GIV that ate the wall on those 2 weeks.

I believe we can mitigate that risk if we use part of the 6M in rewards to have an inverted “Jagged Staircase” either on single stacking or a GIV/oneGIV farm to avoid the selling of the GIV that the LP has eaten on the previous 2 weeks.

I took another harder look at your params, very interesting and very meme-able concept of the Jagged Staircase, I love the name. However I am a bit concerned by the dramatic highs and lows of the staircase, as well as the continued promise of more rewards, which might not be sustainable in the long run.

“The higher you stand, the greater the fall”

Well, I actually don’t know if anyone said that, but the point is, if the program continues we couldn’t sustainably offer higher and higher rewards. The opposite would in fact be that we would have to reduce rewards to rein in emissions. Without a robust buyback strategy we should consider becoming more frugal with how we distribute GIV.

We thought we could wrap up the GIVfarm in 6 months, but realistically even with GIVpower I think the GIVfarm will still be relevant and necessary for at least until 2023. Point is, things take longer than we expect, it’s fine, but we should aim to make them sustainable from the start.

With that in mind I would like to present “Ranging Mesas” (No, this is not a macOS release.) 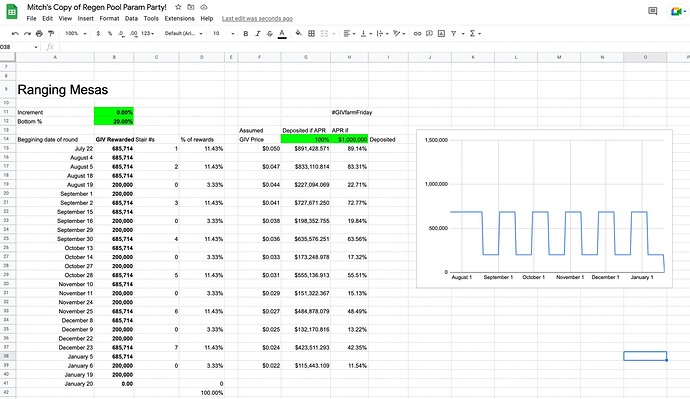 This still takes in the mechanic of APR highs and lows on regular intervals, which with proper communication could incentivize users to constantly rebalance the GIV/oneGIV LP (right?). However with this we can set a steady course of APRs at least for the first 6 months, which if deposits into the Angel Vault flatten (do not increase) then we’re not “overdistributing” GIV without any noticeable growth or success of the Angel Vault.

After the first 6 months we can see if the program is working or not and adjust APRs to perhaps a Jagged Staircase approach or remain with the Ranging Mesas to rework a better promotion strategy.

At any rate whichever method we choose I think a clever communication strategy will be key to get middle to advanced users interest and “playing the game” how it’s supposed to be played. We could consider showing a “map” of the distribution to users can predict APR changes and coordinate their liquidity provision according to what we want them to do. 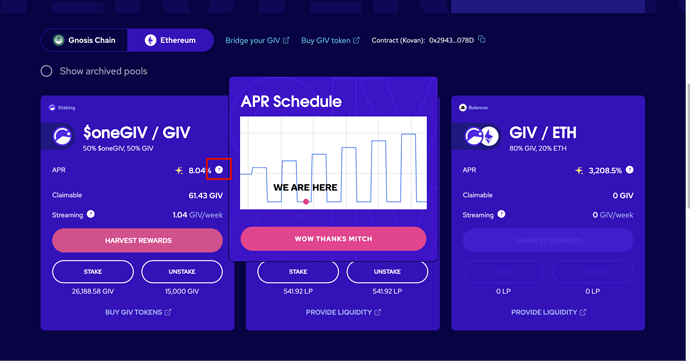 This is by means only an example but really we’ll need to get creative in intuitive communications to maximize the benefits we’re trying to create from these APR high and lows.

I forgot to attach a copy of my spreadsheet, here it is!

That seems like way too much development work, at least for launch, lets just get this baby out… but I think we could try to make it happen after launch… it is very relevant a month after launch, but less of a thing at launch

The Ranging Mesa ends up being a downward staircase if the GIV price goes down… and given our stream and the bear market, I would assume that it will (you basically have to be staking GIV somewhere to beat inflation), so flat reward amounts in GIV, means reducing rewards…

While the ranging Mesa is simpler in the docs, we want to really get people excited about putting stable tokens into the angel vault, and honestly, as time goes on, it is likely that we will have more and more GIV in the angel vault, which I think makes the offer more and more risky (you are buying into a more volatile pool as time goes on), we should increase the rewards due to that risk IMO.

That would be why you reassess after 6 months to see if rewards need to be higher or lower.

We should consider in moving away from looking at GIV in USD terms and more of its absolute quantity. The price of GIV might go down but our total supply does not increase. The faster we spend GIV the harder it will be once our market cap fully dilutes to try to get that GIV back through programs in the future.

So are you saying we should decrease the amount of GIV to go out for incentives? Because from your proposal, it seems like you are suggesting the same overall “amount” of GIV in the same time period… only adjusting the way it is distributed.

Ah that’s true, then I suppose the actual amount gone out wouldn’t change after 6 months. In comparison to jagged staircase it distributes a bit more in the beginning and a bit less later on, but it is simply a flat amount of GIV allocated to each mesa.

Maybe my hesitation would be the thought process behind “number go down, give out more”.

Discussion from Research call - Jagged staircase is acceptable, increase MoM is due to riskier GIV position as time goes on.